Solidarivir was a a tatic that integrates the strategy planned by students in Brazil to invite the top #1 university that requests biotech patents in the country. Inside it’s box, a letter to UFMG was delivered. The idea was to symbolize that more than 350 people within UFMG’s community were offering the university an opportunity to unlock its solidarity – the first line treatment for a pandemic.

A box that was covered with paper and painted to resemble a generic drug package according to Brazilian specifications. Solidarivir is the name of the drug. The dosage is 19mg. Where we would see “oral use” on an official generic package, we see “uso colaborativo” – which means “collaborative use”. Where we would see “generic drug”, we see “acesso garantido”, which means “access guaranteed”. Where we would see the name of the manufacturer, we see “UFMG” – the name of the university solidarivir was given to as an invitation. We can see solidarivir is locked with a padlock made of paper and glitter. In order to open solidarivir’s box, you need to damage the padlock. Solidarivir comes with a big key made of paper, where you can see “UFMG” and 350 signatures. These signatures represent more than 350 people who signed a letter to UFMG inviting the university to sign the share its knowledge widely to end the pandemic. The letter was delivered inside solidarivir’s box. 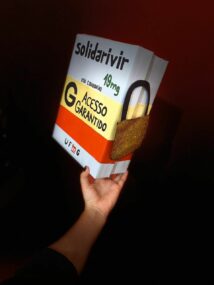 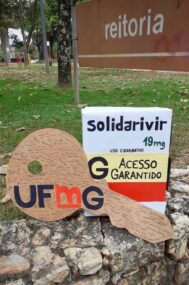 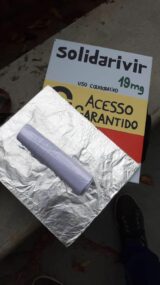 Make a version for your target.

Solidarivir’s simbology was really interesting. Its pictures helped us publishing a text about the initiative in the local news. It was also published in Le Monde Diplomatique Brasil to illustrate a text about the role of public universities in ending the pandemic.

I would send solidarivirs to all public universities in Brazil! But I would make the boxes way bigger to get a lot of attention.

Take care when using glitter. IT GETS EVERYWHERE. Three months later, I can still find glitter around.