The objective of the work was to find a playful and timely way to encourage people to head to the free the vaccine website and support the open covid pledge by signing it.

The Kookaburra group created a giant inflatable syringe in season 1. At the end of this season we turned the action of blowing it up into the performance. Dressed in Santa and elf costumes we set up a santa’s workshop down by the Yarra River. In the video you will see Santa and the elves busy building a giant inflatable syringe to fulfil an Xmas letter to Santa. Dear Santa, all I want for Christmas is a free vaccine big enough for the whole world! 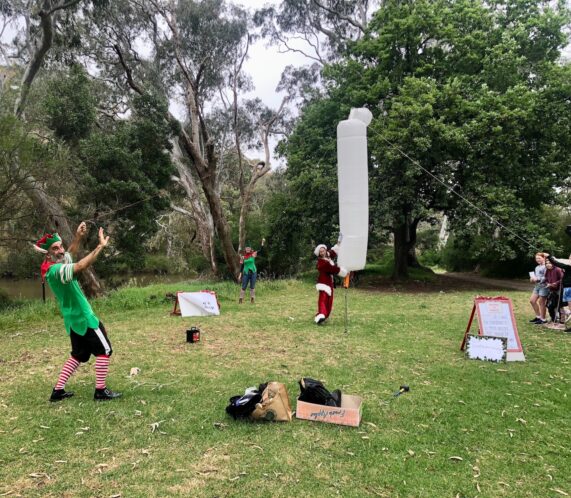 Make it in your community.

Connect with another holiday.

The crowd engagement was an unexpected highlight. We had a group of children helping with one of the guy ropes as we controlled the giant puppet like syringe. They asked some fabulous questions and were really curious. My favourite comment came from a child only about 10 years old: is this an Elon Musk project?

The syringe was made by Greg Giannis in Season One. I thought it was a feat of engineering. He removed his car battery to power the inflation.

This work was building on the work done in Season 1. In Season one, Greg and Tessa built an inflatable syringe but due to Melbourne lockdown never got an opportunity to launch it. This Christmas themed work was the second time the syringe had been launched and it was also the first time all participants had met in person. The Christmas theme was a way to package up the filming of the syringe in a playful and timely manner.

All the collaborators brought a sense of fun and flexibility to the action. Greg Giannis was the mastermind behind the inflatable syringe. With his background in engineering he created it so that it could be inflated from the power of a car battery. Tessa Marshall as a medical doctor created the brochures that we handed out at the action. Zan, who loves a ‘dress tip’ organised the signs and costumes.

We had a lot of interest from children and in the process of inflating the syringe we drew quite a crowd.There was a definite sense of fun and curiosity from the crowd. the video of the event was edited and put on instagram with positive responses.

It would have been great to have a few more hands on deck so that during the inflation of the syringe we could have had people talking with the crowd about our objectives. We were so busy with the handling of the syringe this opportunity was missed.

video of an action