– To educate people on how vaccines are made, patented, and distributed
– To raise awareness of how patents play a detrimental role in access to vaccine
– To spark dialogue around these issues with the public

“I’m Just a Vaccine” is a parody of School House Rock’s classic video “I’m Just a Bill’’ from 1976. The animation features a vaccine and a kid having a conversation about the vaccine pipeline and how the Covid-19 vaccine is still inaccessible to much of the world because of restrictive licensing and patents. The video directs viewers to a platform on the Free the Vaccine website that showcases past instances where patents were not enforced on heath (and other) technologies and aims to spark dialogue on these issues. 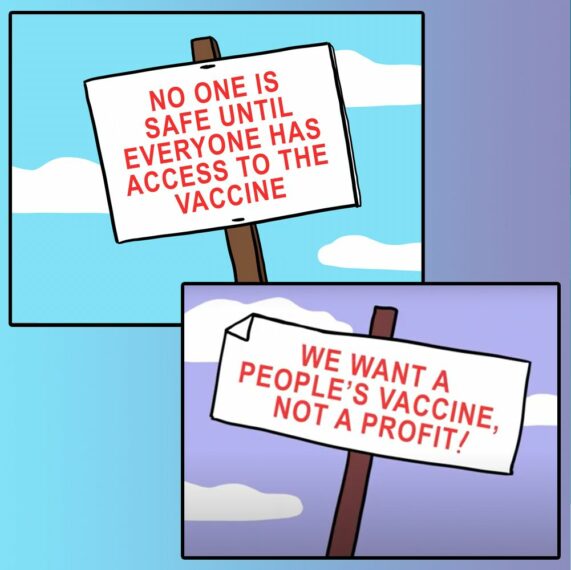 The video went viral! In less than 24 hours, the video got 100K+ views on Facebook via Occupy Democrats.

The video worked really well because it’s based on an iconic video with an easily identifiable style and contains accessible language about a very complex issue that empowers everyday people to engage with this pressing issue.

Daria originally came up with the idea in the Funify R&D squad and we just rolled with it! After discussing the objective of the video and the messages we wanted to get across, Dannie and Heloise formulated the script. We changed the words to get the right messages across while cutting down on the length and still keeping the structure similar to the original. Meanwhile, Daria was the mastermind behind the animation. While staying true to the iconic style of the original, she developed unique characters and setting for the video. After the first draft of the video was completed, Dannie and an actor, Eamon Kinsman, did the voiceover for the kid and the vaccine. In the final weeks before the launch date, Dannie and Heloise created a social media plan for the video’s launch.

A combination of Daria’s fabulous animating skills, Dannie’s tremendous organizing, writing, and voice-over skills, and Heloise’s writing and support, gave us the foundation necessary to create a successful video and have a great launch.

1.4k likes on Facebook in less than 24 hours and lots of positive comments!