With this Jonas Salk sketch we would like to encourage you and as many other people as possible to print out the sketch and take a picture of Jonas Salk in front of a landmark, a place special to you or a beautiful place in your surroundings. Much like the extremely successful Flat Stanley project more than 25 years ago. By spreading the word on social media, you can encourage others to do the same, help carry on Salk’s legacy, and remind people of a role model who prioritized people’s well-being over profit.

We have depicted Jonas Salk in his role as a role model in vaccine development and distribution in a cartoon-like drawing. This eye-catching and charming design is intended to help spread Salk’s scientific and philosophical spirit and create a distinctive recognition value. 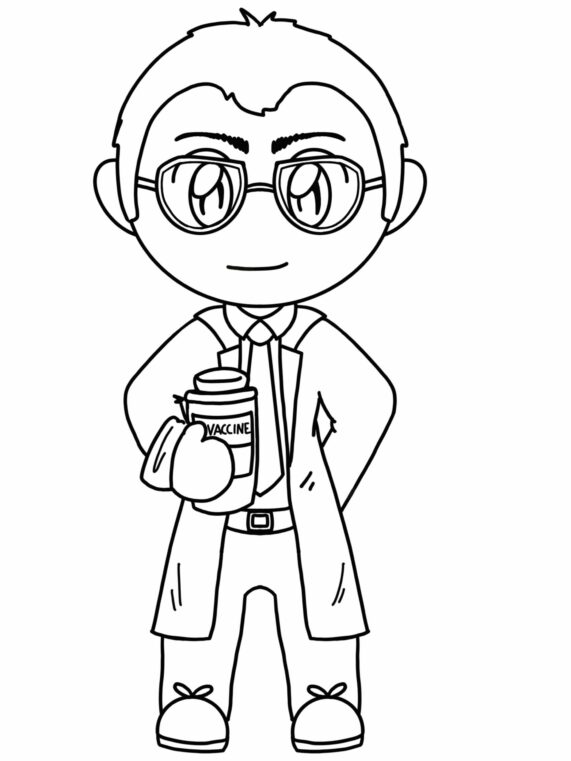 Make your own Flat Salk and help him visit your favorite places.

All the wonderfully kind and human values of Jonas Salk can be perfectly reflected in a cartoon-like style.

1) Print the sketch
2) Glue it on cardboard or thicker paper
3) Cut out the outline of Jonas Salk
4) Take a picture with the cutout in front of a landmark, a place important to you, or a beautiful place in your neighborhood
5) Share the photo on social media and get more people to do the same

A set of instructions exists on how to make this work

Since other drawings in this cartoon-like style had already been created by unrelated projects, all that was needed was an agreement on the elements that would appear. The many iconic images of Salk as a scientist during the successful approval of the vaccine served as a rough template.

Mareike Bielok was responsible for the drawing and the underlying cartoon-like style. Calvin Dunker prepared the rough concept and the elements to be displayed.

Produce an animation series with cartoon Jonas Salk traveling around the world. Organize airplane banners covering all the beaches in the world. Pay very famous people who can’t be convinced by the message behind the image to share pictures of themselves, the Jonas Salk cutout and famous landmarks on their social media channels.