The European Citizen’s Initiative calls on the European Commission to make anti-pandemic vaccines and treatments a global public good, freely accessible to everyone. As the initiative needs 1 million signatures to be brought to the European Commission, it is important to appeal to the general public and get as many people to sign on as possible. We wanted to create a simple, but engaging sticker that would catch people’s attention in public spaces to persuade them to sign onto the petition.

Our stickers follow the principle of Valentine’s Day cards, they show two vaccines that want to be together and provide a QR code to get them closer. The QR code redirects to the website of the Right2Cure European Citizen’s Initiative. We distributed these stickers all around European cities to get people to sign the petition. 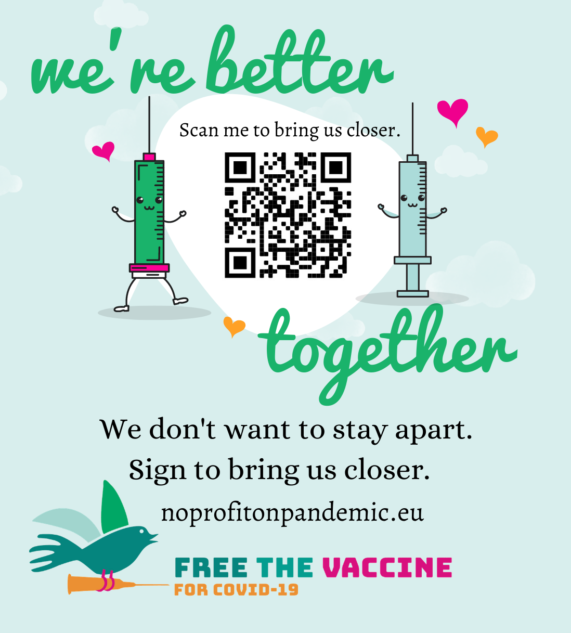 Print it and stick it.

The stickers are very cute and follow the color scheme of the Free the Vaccine campaign – that can help to get people’s attention.

The idea started out when were brainstorming impossible ideas. Someone said that we should force politicians to have hearts. That evolved into sending them hearts. That then evolved into sending them some kind of Valentine’s Day card. But as we wanted to reach as many people as possible to sign onto the petition, we decided to go with stickers that follow the idea of a Valentine’s Day card, which could be distributed all around cities with the QR code of the petition on there.

Plaster every city in Europe with our stickers and hand them out to students for free – because students always like free stickers, especially when they are cute! 🙂