Create a compelling image that will be shared and get us into the press, thus creating additional popular pressure to get Joe Biden to sign the TRIPs waiver.

A banner for the Care Bear brigade to hold up at the DC event in May of 2021.

I find it hilarious.

It will be held up by people in Care Bear costumes in front of the White House.

An original object can be provided for exhibition

Merith had the Care Bear idea. She asked me to help to make the banner. I asked her for a sketch, which helped speed things along. I had to do this quickly, so the outline gave me a starting point.

I’ve had to turn images into vector art to scale up before. This means smooth lines instead of more jaggedy pixelated look. Someone could do a better job at vectorizing this art, but it will look good enough from 10 feet or so and we got it done. After that I tweaked the colors to match Free the Vaccine for COVID-19’s colors. Then added the text.

Everyone who has seen it smiles.

Make some bears and send them to every member of congress!

You can print this large scale for cheaper than you’d think. Or re-use elements and make a different kind of sign. Sharing is caring! 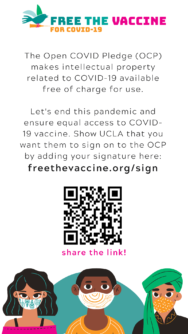 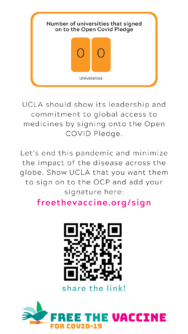 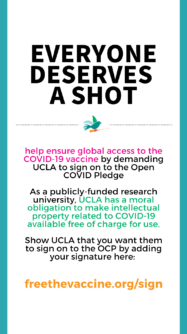 A general representative of UCLA’s Undergraduate Students Association Council reposted some of the graphics, increasing exposure and conversation about the Open COVID Pledge and Free the Vaccine.

I would print these out and plaster them all over the UCLA campus, leaving no surface untouched.

You don’t need to be a professional nor have a fine art background to create social media graphics! I personally used Canva. It has free templates you can easily customize.

Create language to support the larger goal of ensuring that publicly funded COVID meds are available to everyone, sustainably priced, and free at the point of delivery.

This a slogan anyone can use in the campaign for a People’s Vaccine. 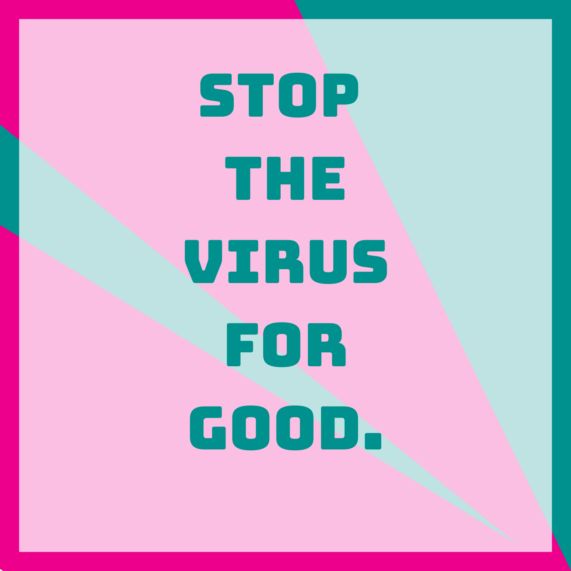 Put it on a poster.

It’s short and sweet. The wordplay of “for good” positions accessible COVID medicine as both effective and morally necessary.

We’re building on Dolly Parton’s $1million donation to support COVID-19 research at Vanderbilt University. To get their attention, to educate them on the Open Covid Pledge, and to add pressure for them to sign the pledge, we chose to produce a viral music video parody of the song “Jolene” by Dolly Parton.

We now want to encourage all universities to sign the Open Covid Pledge, so we are currently discussing the “next challenge”: how to create a full-length video in a way that inspires even more people to get involved and ask universities to make a meaningful change.

The #JoleneVaccineChallenge is an interactive project, initially intended to target Dolly Parton and Vanderbilt University. However, with the success of the project, we are now targeting universities all over the world! (Read more under “Objective” below.)

The challenge, i.e. the “interactive” element of this project, is twofold. First, we invited all members of the Free the Vaccine campaign to help us make a “trailer” for the music video. The video link here is the trailer, which consists of just the first chorus and verse to the song. At the end of the trailer, we challenge viewers to send videos of THEM lip-syncing/dancing to the song. We made a downloadable track and supplied the lyrics to the whole song for viewers. 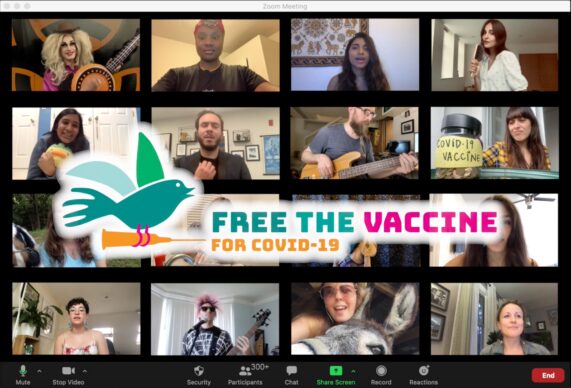 Record your own lip sync and share it on social media. #JoleneVaccineChallenge

Perform it in your own community.

Without Occupy Democrats having shared our video on Facebook, we would have had a MUCH harder time going viral.

Thousands of people across several social media platforms watched and shared our video. We are continuing to call and email Vanderbilt and Dolly Parton representatives to remind them of our video and its growing number of likes/views.

Based on the initial response to our trailer, we’ve decided that our full-length music video should now target universities all over the world. Our trailer features members of Free the Vaccine from many different countries, emphasizing Parton’s and Vanderbilt’s global impact. In continuing this theme, for the full-length music video, we plan to have a few singers/dancers wearing not only Parton costumes or Vanderbilt t-shirts, but also, for example, t-shirts from other universities.

A set of instructions exists on how to make this work

We have gone viral! That in itself is a huge response to our work.

As far as viewers accepting the challenge and submitting videos… So far we have only received a handful of submissions. (It’s not too late to send one yourself!) We are currently outlining our schedule for releasing the full-length music video (probably during the first week of December) as well as three “promotional” videos between now and then; three videos (at least) to help boost our views/likes on social media.

Unfortunately, Dolly Parton and Vanderbilt representatives have not been responding to our emails and calls.

If we had a million dollars, we could probably think of a million ideas! Our team is always bustling around “what if we…?!” Off the top of my head, we would project the final full-length music video onto Dolly Parton’s house(s) and Vanderbilt’s buildings. We discussed the idea of – when COVID cases and social distancing measures relax – a march around Nashville in Dolly Parton costumes. But, why just in Nashville!? Why stop there?! And wouldn’t it be awesome to have the video produced in every language?! We have also discussed how to get famous people to lip-sync/dance for our full-length music video.

Broaden the reach of Free the Vaccine and its Columbia action and get members of the Columbia community to support it by signing the Open Covid Pledge.

An article about Free the Vaccine, the need for its work, and specific activism focused on Columbia University in the City of New York. 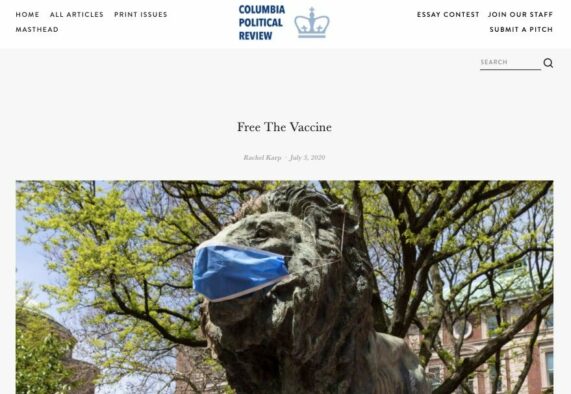 Write an essay for a local publication.

The Columbia Political Review was very excited to publish an article on this topic and alert its readers to critical medicine access and equity issues around COVID-19. The author was likewise excited to learn about the many intricacies of the issues, write about them, and share the article with her Columbia network and her networks at large.

I knew very little about medicine access and equity issues before joining Free the Vaccine. Weekly FTV meetings gave me a strong initial understanding, but I spent weeks researching a ton more before I felt like I could be any kind of authority and write about the problems that have and will arise around COVID-19 vaccines and therapeutics. It was challenging to learn so much about something so new, but I’m very grateful to have gained this understanding and to continue to share it beyond this article.

I posted about the article on my social media and had lots of people from college respond in support of it. Even people I hadn’t had much interaction with since graduating (a decade ago) liked it or commented on it. As reaching the Columbia community was the goal, that felt like a huge success.

A few ideas: Following up with each and every person I know who went to Columbia and making them read the article and sign the Open Covid Pledge. Hosting a panel or panel series at Columbia in which some of the people quoted in the article talk about the need for open licensing around COVID research and ensuring all testing, treatment, and vaccines are available to all and free at the point of delivery. Having all of these people send the article to Columbia administration and demand they sign the Open Covid Pledge.

A pithy message that will hopefully direct people to the site or to ask what it’s about.

This got the likes on Facebook, however don’t know if anyone went to the FTV site to find out more.

Because I am not a writer it was great to work with others who could come up with a pithy message and then I could play with it for different uses. There is a poster that contains this message with a longer explanation so this, a twitter graphic, and the poster can be used simoultaneously for greater impact.

Print it and stick it!

Create language to support the larger goal of ensuring that publicly funded COVID meds are available to everyone, sustainably priced, and free at the point of delivery.

This a slogan anyone can use in the campaign for a People’s Vaccine. 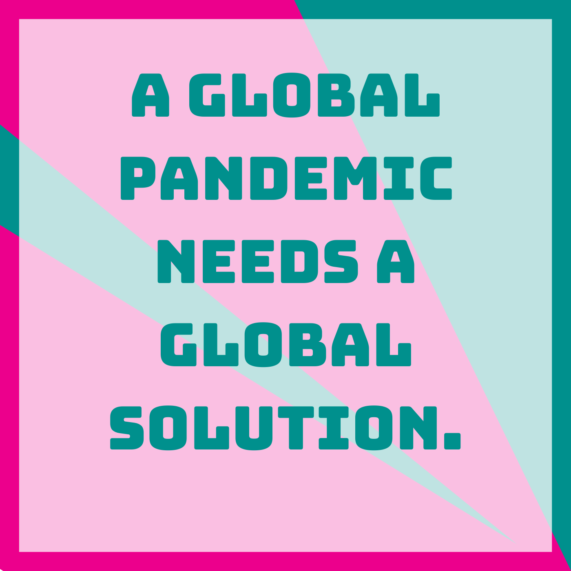 Put it on a poster.

Use it in your writing.

It makes its point concisely. It’s also flexible enough to be useful in different contexts related to the campaign.

The objective of this image was just to create a poster that could be used to gain support for the Free the Vaccine campaign.

This image is a rectangular poster that has several colorful people in three lines across its length. The people are a very diverse group and depict multiple genders, ethnicities, races, ages, sizes, abilities, religion, and more. In the middle of the people is a blue box with the words “Who Doesn’t Deserve a Vaccine?” in large print. In smaller print is “Let’s give everyone equal access to a life saving COVID-19 vaccine!” In the bottom right corner are the words “#Freethevaccine.” 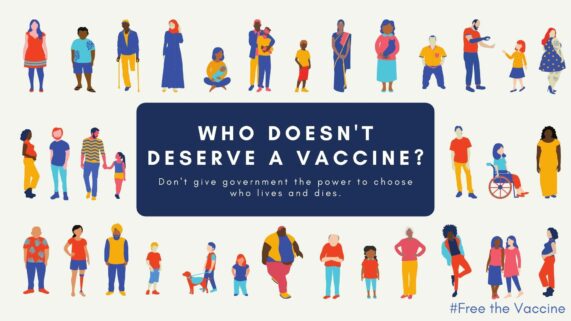 We tried pairing other images with the question, “who doesn’t deserve a vaccine,” and this is the one that worked best. Photos got too specific – the cartoon felt like a better fit.

This image was created using canva.com, so all art work was pulled from this site.

The next steps would be to further refine this image and then use it as a poster to put everywhere (billboards, subways, etc.). So people realize that EVERYONE deserves access to a vaccine.